After a year of actively observing the transition from Java EE to Jakarta EE (including several conferences I have given on the subject), I’ve decided to get more concretely involved in 2019. I’ve taken the opportunity to participate to the MicroProfile GraphQL initiative.

In this blog post I’m going to explain how the group started, what are the challenges and what will be the next steps.

Things started by a discussion initialized by Phillip Kruger on the Eclipse Microprofile Google Group. Phillip is a well-known and active contributor to the Open Source Java ecosystem. Has has already produced a demo project  showcasing how to use GraphQL in a Java EE context.  He is also contributor to the Extensions for MicroProfile project. A few others have joined the group including Andy McCright from IBM (acting as the project lead) and we are lucky to benefit from the support of Bojan Tomic,who is the main contributor to GraphQL SPQR project. As we will see, GraphQL SPQR is the main source of inspiration of what we want to achieve.

GraphQL is an open-source data query and manipulation language for APIs, and a runtime for fulfilling queries with existing data. It provides an alternative, though not necessarily a replacement for REST.

GraphQL was developed internally by Facebook in 2012 before being publicly released in 2015.

On 7 November 2018, the GraphQL project was moved from Facebook to the newly-established GraphQL foundation, hosted by the non-profit Linux Foundation. This is a significant milestone in terms of industry and community adoption. GraphQL is used by many large and small companies including Atlassian, Coursera, Facebook, GitHub, PayPal, Twitter, and many more.

I’ve discovered GraphQL a few months ago with the excellent GraphQL Java tutorial introduction from Bojan Tomic. Based on a simple use case, it demonstrates the capabilities of GraphQL in general and of graphql-java in particular. I’ve been impressed by the flexibility from a client perspective. Thanks to a powerful query language and a schema describing the available data and the operations, it enables the client to interact with the server in a very flexible and precise way asking for just the needed data. This is a great advantage, especially for the development of mobile applications.

How is MicroProfile going?

The official purpose of MicroProfile is to optimize Enterprise Java for a microservices architecture and delivers application portability across multiple MicroProfile runtimes.

What about Jakarta EE?

Jakarta EE is the new brand name for the future of Java EE. It is backed by the Eclipse EE4J project. In fact EE4J, it is a top-level project made of 39 projects. Most of 2018 has been dedicated to the transfer from Oracle Java EE to Eclipse EE4J as described by Dmitry Kornilov.

A major milestone to mark this transition has been achieved with the release of Eclipse GlassFish 5.1 mi-december 2018.

To ensure the future of the Jakarta EE platform, and to replace the Java Community Process, Eclipse has defined a new specification process  named EFSP (Eclipse Foundation Specification Process).

The first project to follow it will be Jakarta EE NoSQL which will leverage the existing Eclipse JNoSQL project as described by Otavio Santana. The goal of this specification is to ease integration between Java Applications and NoSQL databases, with a common API to work with different types and vendors of NoSQL databases.

There is a strong connection between MicroProfile and Jakarta EE, they are both Eclipse projects and are backed by the same community (including IBM, Red Hat, Payara, TomiTribe and Oracle). To make a long story short, MicroProfile can be seen as an incubator for Jakarta EE. It proposes specifications in a very dynamic way and some of them are expected to be part of the Jakarta EE platform. May be, it will be appropriate to merge the two projects when Jakarta EE reaches maturity, but for the time being, it is better to keep them separate.

A short introduction to SPQR

SPQR stand for Schema Publisher and Query Resolver. It fits very well with the context of MicroProfile by proposing a code-first approach (vs schema-first approach) based on a set of Java annotations.

When the application is started, a schema is automatically generated from these annotations. The structure of the schema is then available at a given URL (suffixed by schema.json) and an introspection tool such as GraphIQL can be used to discover and test it.

Following a code-first approach with a strongly and statically typed language such as Java proves to be highly productive. You do not have to maintain both the Schema Domain Specific Language and the Java code.

Technically, SPQR is a layer on top of graphql-java. It is an alternative to graphql-java-tools which enables to follow the schema-first approach.

To put it in action and to increase my knowledge, I’ve decided to reshape the above mentioned GraphQL Java tutorial introduction. I will publish it on GitHub ASAP. On the plus side, I’ve appreciated its ease of use (just a few annotations makes the deal, no need to implement or extend any specific class or interface). On the minus side, I have suffered from the lack of documentation. Discovering both the subtleties of GraphQL and SPQR at the same time has been a challenge.

But in the end, SPQR is clearly a good starting point for what we want to achieve in MicroProfile.

We have to finalize our proposal and get the approval of the MicroProfile Board to officially become a MicroProfile project.

If accepted, it will then evolve as a standalone specification. The next objective is to be part of one of the above mentioned MicroProfile releases.

Before that, there are many challenges ahead of us:

To illustrate the ease-of-use of the programming model we have in mind, here are 2 code snippets: 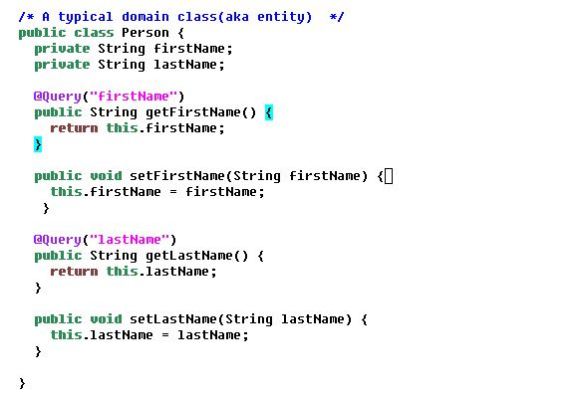 No doubt that there are many other challenges ahead of us … But working on such a project is a great opportunity for me and my company Worldline to contribute and influence the specification. If you’re interested you can also be part of the story, just show up in the Eclipse Microprofile Google Group. You will be welcome!

With NoSQL and GraphQL in sight, the “future of Java EE” is on track!

5 replies on “When GraphQL meets MicroProfile”

[…] This entry is based on the following one, written by Jean-François James (Senior Software Architect, Worldline by Atos Worldline). https://jefrajames.wordpress.com/2019/01/04/when-graphql-meets-microprofile/ […]

[…] you don’t know what MicroProfile GraphQL is about, please have a look on my previous post and on  GitHub. In short, it aims at making GraphQL a first-class citizen of the MicroProfile […]